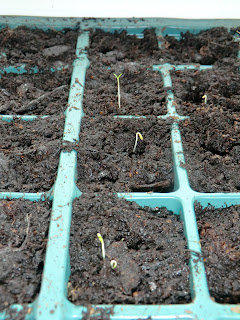 I'm in a bad mood
I'm sorry to say that even the sight of my first seedlings had done nothing to lift it. I know why I'm in a mood, its cause I have to go back to work next week. Now don't get me wrong I like my job I work in a haberdashery so for someone like me that's great. Its just there are things I wanted to get done before going back and while I've done some, I've put off the jobs I'm not that keen on and how I'm gonna have to do them cause I'm running out of time. Silly things like the pile of washing which I'm trying to ignore. I need to get my little cat spayed and I don't know what vet to use cause the one we went to with Cassi nearly killed her as she had a bad reaction to the anesthetic, and I'm worried it might be too late and I keep asking her if she's been playing with boys but she won't tell me. There is loads of stuff to do in the garden but we've had bad frosts so there's not much I can do and my dahlia tubers have gone moldy. I'm procrastinating and putting off writing up my patterns cause as much as I love making them up, writing them so other people can understand them is hard. I'm not a fast typer and my brain goes stupid sometimes so I'll write the wrong word or put letters in the wrong order, I have to spellcheck everything.
So all in all I'm in a mood and I'm sitting on the sofa writing this instead of patterns with my maybe knocked up kitten on my legs trying to think what to do with my day.
Here are my options
1. get up sort myself out, tidy the kitchen, do the washing, cook the ham and make some buns. Spend some time in the craft room writing up patterns before going into the garden to clear away the dead things. Have a lovely tea and a glass of wine and watch how to cook like Heston.
2. Sulk, play on the Internet all day. Have a rubbish tea of toast and wine, fall asleep when Heston is on and wake up in an even more bad mood tomorrow cause I've done nothing today.

Hmm think its time to put some motivational music on and crack on with things, but I reserve the right to slam thing and bang cupboards I'm still in a mood don't you know. 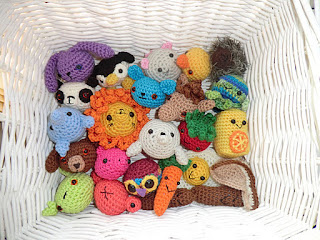 The basket of bobbles is getting bigger and bigger. I promise to write more patterns soon x
Posted by lizwardcrochet at 10:15