A week ago I posted my latest pattern set of trick or treat dolls. I got some lovely comments on them on here and my facebook page. I was asked on Facebook if I'd ever considered doing the characters from the nightmare before Christmas.

I love nightmare before Christmas and all the fantastic characters in it and they are perfect for amigurumi.  I thought there would be loads of patterns out there already for them but when I did a search for Jack skeleton i wasn't that impressed with what I found. I figured I'd give it a go. 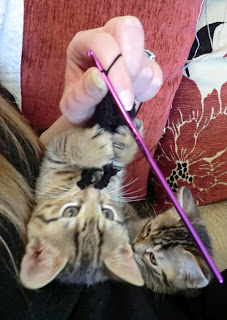 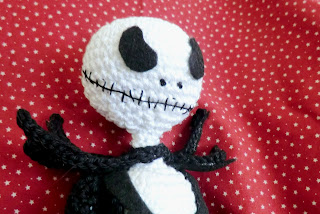 The main thing I wanted with this design was to keep him tall and slim to keep him looking as much like the original character as possible. That doesn't make for easy crocheting and when I get this pattern written up it will come with the health warning *crocheting this is so fiddly, it will frustrate you so much you will want to throw it in the bin at least 6 times. This is normal have a break and a cake before continuing* 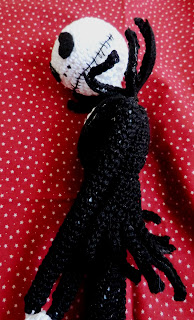 The head, neck, body and legs are all worked in one piece so it actually works up quite quickly. I do wish I could find black toy stuffing as there is no way you stop the white stuff showing through.
In the film Jacks suite is pinstriped but I just couldn't make such a fine stripe on his suit without him looking a total mess, id rather he looks smart in a black suit so I can live with that. The jacket is all crocheted in one piece and has a bit of felt detail. 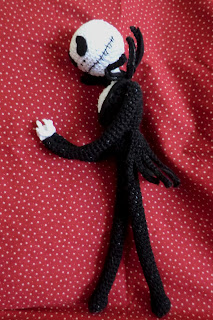 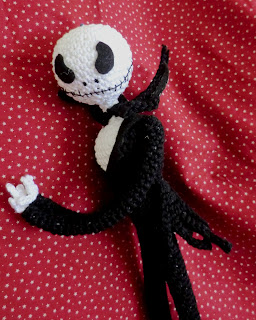 I was gonna make skeleton hands out of fimo but I wanted him to be able to hold hands with Sally so I stuck with crochet.

I'm linking in with handmade Monday as usual and I'm also joining in with the handmade Halloween link party :)