I'm starting as I mean to go on this year and being super productive. I'm secretly hoping that if I do lots and lots of work and sell lots of lots and patterns, I can get a holiday this year. I haven't had a true break away for the past 7 years, so I'm going all out to get my goal.

I starting out by doing some of the things that were on the to do list for 2016 but I just never got around to doing.

I've updated lots of patterns so far in my Etsy shop 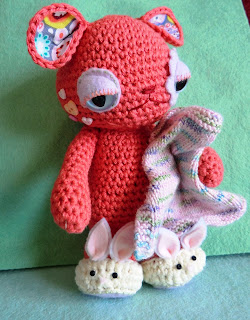 When I started this blog is was mainly to show off my first cute creations the Omnipoms. I had never planned on writing patterns for these, but then a couple of years ago I created the Halloween Omnipoms pattern for a giveaway with suncatcher eyes. 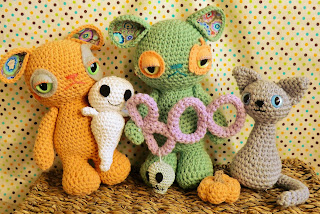 After writing that set of patterns  I decided to write more Omnipom patterns but 2 years later I haven't, until now.

I decided to recreate some of my old designs but make them completely crochet patterns with just a bit of embroidery work. 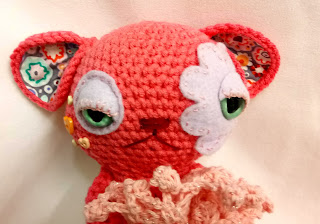 I've started with Twist as she is my favorite. 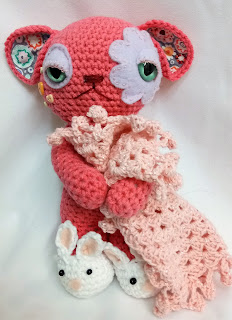 I've changed the blanket to a granny square with a bobble trim and updated the bunny booties to a full crochet version. The pattern has already been released into my etsy shop at only £3.50 (excludingVAT)
Its on the new simple, beautiful and easy to understand, printer friendly format and as an instant download it can be yours in moments.

I am also going to be selling sets of accessorizes of these patterns. They will include the hand painted eyes, felt, fabric, beads and the tiny buttons - all things that make an Omnipom an Omnipom. I'll have them in the etsy shop soon (I'm just sourcing some more of the fabric) if you are wanting one of these packs comment below or message me on Etsy and I'll be in touch when I have them ready.

I have another omnipom on the hook at the moment so there will be more patterns like this coming soon. I have got a holiday fund to build after all :)