This past week I've been gearing up to do a craft fair yesterday. Now as I am a crafter you'd think I'd have lots of things to sell but most of the time I'm working on amigurumis to sell the pattern so I don't actually have a lot of stock to sell. I didn't let this put me off and got cracking on making stuff to sell. I used up some wool that's been lingering in my stash for a while and made bags, scarfs and headbands. I got the fimo out and made some more ghostly necklaces and I collected together all the finished amis I had that I didn't need for photo shoots. For a week I didn't get much sleep but I got a healthy amount of stock ready for Amigurumi Barmys first craft fair.

On Saturday we were told there wasn't enough room for us at the fair and we would have to go onto the waiting list for the next one :( Gutted after all my hard work but I knew we'd get another one sorted soon so I could let my aching hands relax and I settled down with a glass of vino to watch new Doctor Who :)

Angela who was doing the craft fair with me then rang to say she had managed to get us in at the boroughbridge and aldborough show in the craft tent. I'd sort of got my head round the idea of not doing a craft fair now and had mentally planed to tackle the garden which with the changeable weather has got a bit on top of me and now looks a bit of a jungle. I'd also had a glass of wine and was craving bed and a lie in not a 6am start and another busy morning but I didn't want to let Angela down so I sorted out my stock and other bits and pieces I needed, set my alarm to a stupid time for a Sunday morning and tried to get some sleep.

After a few hours of sleep it was time to be setting off. We had fun finding our way there and confused the signs to the show with some for a bike race and ended up following lots of bikes for a while, but we got there in the end. Setting up was quite simple Angela does a lot of contemporary textiles and some crochet too so our stuff looked really good together and I think the stall looks really interesting and inviting. 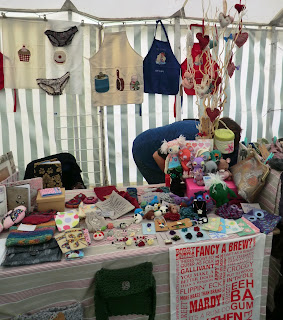 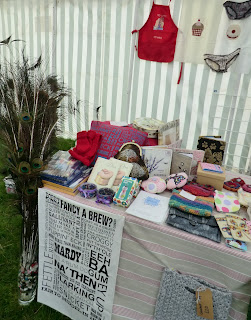 Fancy a brew? I was gasping for a cup of tea by the time we'd set up. These Yorkshire saying tea towels are Angela's that she made in her print studio. I've very jealous of Angela studio space, she has a huge building at tockwith where she runs classes and hold craft party's her website link is here The knickers you can see in the pic are from one of her new projects for hen party's and let to lots of comments from amused customers throughout the day. 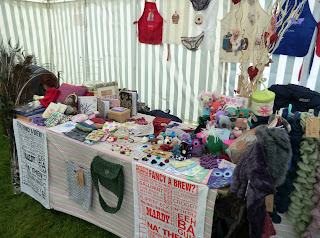 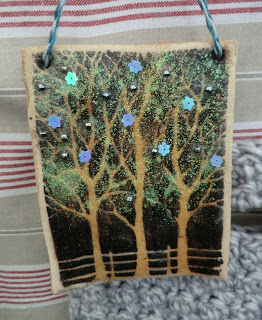 More of Angela's work this is salt dough. I aways think of salt dough as a tradition craft but I love the way here she has used contempary stamps, inks and glitter and created something really different.  She does salt dough parties for kids to come and get messy playing with crafts. its a great experience and something a bit different for birthday party's. Plus the kids get to take home something they have made. 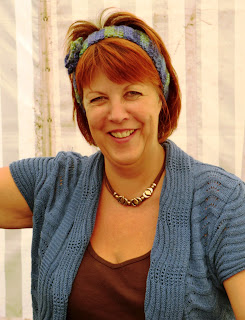 Angela herself sporting one of my headbands.

We had a lovely day. We didn't sell much, Angela tea towels were the biggest hit, closely followed by my fimo jewellery and little crochet toys. We got some really good feedback and all our products were cooed over and admired which makes me puff my chest out and walk a bit taller today. It was also lovely to be around the other crafters, there was a really nice atmosphere in the tent. We were next to a cake stand and a card maker.
I was surprised at how many bought in crafts were on sale though. I couldn't help thinking after my week of working tirelessly to that buying in crafts was cheating a bit. I know its a hard time to be a crafter but to me, handmade will always be worth paying that bit extra for.

its handmade Monday time again so go have a visit to some of the lovely crafters blogs :)