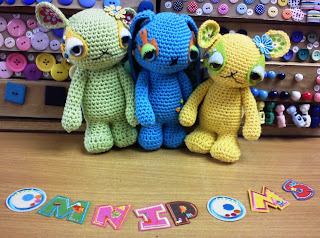 Its been a while since I spent some time with the omnpoms. There is some exciting stuff coming up with this cheeky lot. Tony and the the twins above are hopefully behaving themselves as they've gone off to stay my artist friend Alex to model for a new project.

I really like these guys, everyone has its own personality and they are really fun, if a little time consuming to make. The pattern for them seems to change every time I make one but I think its nearly getting to the point where I'm happy to publish it.

The newest member of the family is Ginger. 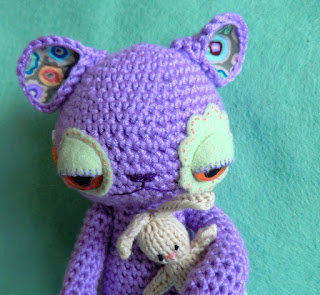 Ginger was inspired by a sketch by Alex and she's the first of a set of 3 bedtime omnipoms.
Her name comes from the amount of ginger biscuits I consumed while making her. I've been hit by this banking problem with RBS and so I've had very little money over the weekend and I've been having to raid the cupboards to make food out of whatever I've got left. I made a batch of ginger biscuits but got the quantity's a bit wrong so ended up with far to many. My resulting sugar high probably explains why at 10pm last night I though it was a good idea to knit her little bunny bear on the smallest knitting needles I own :) 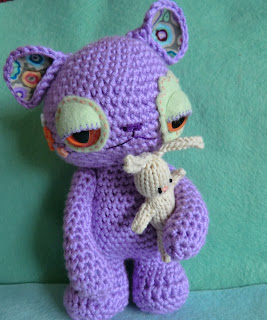 I'm linking in with handmade monay as usual :)
Posted by lizwardcrochet at 10:28