I just had a look back at my last few post and I there is so much I haven't written about. Settle in this might be a long one.

In no particular order I'll catch us up.

Gauntlet madness has been all consuming. My day to day work life has change so much. I now spend most morning putting together kits and packing gemstones. I have to go to the post office so often now I splashed out and got myself a bike. 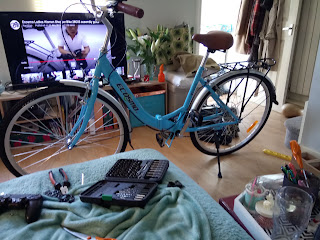 Meet Lucille II. She a traditional ladies bike but she folds in half for easier storage. I hadn't been on a bike for over 20 years and so was a little nervous about going for my first tootle. After a little shacky start it turns out riding a bike is just like riding a bike, you never forget. Me and Lucille II are firm friends now and its making my trips to the post office much quicker.

After I finishing work get each day, I've been trying to take some time to relax. Something that doesn't come easily to people like me, who work for themselves. Just sitting and reading a book feels like a real indigence and my brain keeps telling me I should be doing something more important. It took a while just to learn to let myself relax and not think about work.

The upside of this is when I do come back and work I'm refreshed and excited about new projects.

I have been working on a few new things. I had decided I would make an Iron man sleeve after finishing the infinity gauntlet. I knew it would be a slightly trickier project as the design was so different. It took a lot of puzzling out but in the end I produced a pattern I was happy with. Not only does it look right it is also as simple as possible to follow for all levels of crochet skill. 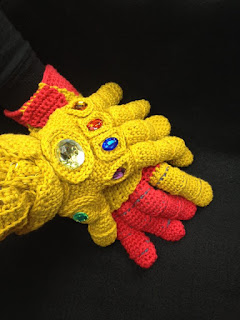 If you make both you can play fight. I am an adult honest :)

This pattern is also available as a full kit
While I've had such success with the infinity gauntlet kit, I though it was a good time to invest in setting up a few more of my best selling patterns as kits also. I've got small kits for some of the marvel character dolls and I've added this one for the sheep draught excluder

This is the most expensive kit I've put together so far but there is a lot of yarn needed for this project. I know it can be difficult to get the exact yarn for this so I hope this kit does sell. It might be a bit of a treat but we need to indulge ourselves now and them.

While I'm on new things in my etsy shop I'll keep on subject and write about the other new patterns I've been working on.

First up and a bit of a departure for me is my first ever knitting pattern. I have written knitting patterns for books and magazines but this is the first one thats available only in my etsy shop. 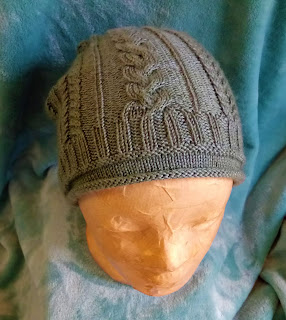 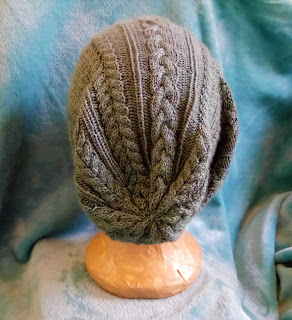 If you are a Marvel geek like me you will have seen the new Avengers Infinity war film. I loved it. I've been to see it twice and want to go again before it leaves the cinema. I could go on and on about it but I think this post is going to be long enough already.
In it the character Wanda or Scarlett witch has a scene in Edinburgh where she wears a slouchy cabled hat. I have a friend who cosplays all of Wanda costumes and she had asked me to create her a hat just like it.
I had a go using the blurry on location pics that came out before the film did but when I saw the actual thing I was pretty sure I knew what to tweak to make it as close to screen accurate without using the pattern it was made from.

Here is the finished result. We got yarn dyed specially from Sheep on mars and she has now made the colour-way available in her etsy shop
I am so happy with this pattern, Its is available now from my etsy shop. As with my crochet patterns I have kept the instructions simple, clear and easy to follow. There is also lots of photos.  Its a super cute hat and makes a lovely project. Its 4ply so its lightweight and can be worn in all weathers.If you are a knitter please go check it out. It does have a project page on Ravely also so join in the fun there if you want.

Next up is another Groot crochet pattern 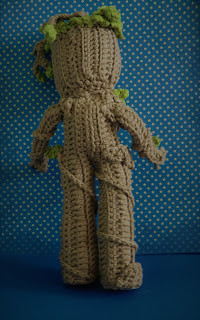 As Groot grows up in the film I wanted to make a new pattern of the teenage version. I had this written out and made in piece months ago but never got around to putting him together. In a way I'm glad this happened as when I finally when to finish this project I had some new ideas and I added in more details.
I love the way he turned out. he may have grown up a bit but he's still so cute. I know the original of this pattern was very popular so I hope this one will be to. Get your hooks out and grow up you Groot :)

Thats all the new patterns for now but I'm working on more. I'm trying to set goals so that I don't have massive gaps in releasing patterns and blogging. My aim is one new pattern a week and two blog posts a month. Here's hoping.
I'm also thinking about doing some Vloging. I already have a youtube channel and I keep getting asked to do tutorials. I'm thinking that some kind of informal crochet podcast where I share what I'm working on, with the odd tutorial thrown in for good measure might be quite fun to do. What do you think??

In other news there is going to have to be some changes to my Esty shop. Etsy have put up their prices for us sellers and it looks like they might make it more difficult for our stuff to be seen unless we pay a premium.
I have lots of patterns and not all of them sell that great. I'm quite happy for them all to be on my shop as I love them. However with these Etsy changes I'll have to think again.
I am going to be retiring some patterns. I am also going to be making some patterns only available as part of a bundle. On the plus side I am going to be making some of the patterns I retire into free patterns on here.
This will all be happening over the next few months so stay tuned to my facebook or Instagram if you want to stay informed all details can be found at www.lizwardcrochet.com
I will also be adding a independent shop to my own website ↑ this will exclusively have the new designs first and cheaper so add it to your favorites now. 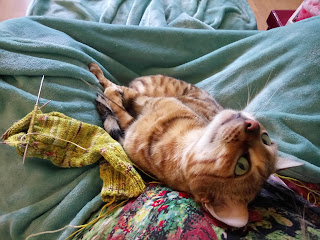 I'm going to be doing some more knitting projects. I'm working on my first sock pattern at the mo. Cal is trying to help.

All in all there is still loads more to catch up on but its getting close to tea time and I've a shepherds pie to get in the oven. Yum
I think I've covered the most important things, the rest is just fun stuff but I will post it all in the second part of this post next week.