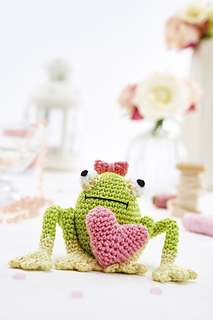 Earlier this month I announced the very exciting news that I am now working with Lets get Crafting magazine and shared the first project I have created for them this rather cute frog. You can read about it in this blog post if you would like. 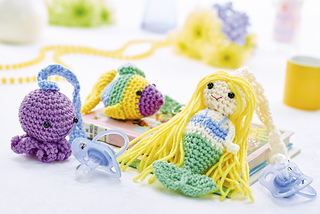 The patterns have now been released on Ravelry for the next issue, issue 77 so I can share my project.

I was asked to create a set of three dummy buddies. little toys that can hang off dummy's or can be hooked onto a pram for a child to play with.

The inspiration image I was sent was of a little blue bunny, so my first suggestion was to go down the traditional baby toy route of bear, bunny and duckie. I wanted to give my editor another option though and after a bit of thought I suggested a underwater theme with a octopus, fish and baby mermaid. 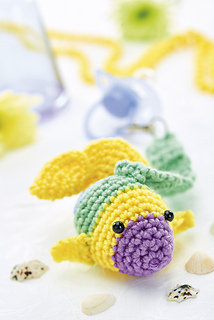 Well I'm sure you can tell by the photos of this pattern set what my editor went for. I think it was the baby mermaid that swung it, she got a bit excited about that.

Lets get crafting magazine comes with the yarn and hooks you need so I had the colours I would be using provided for me. 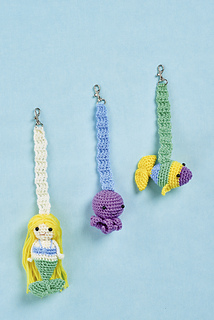 I love this photo of them all hanging together. They came out just how I wanted and I'm not sure which is my favorite now.

I was going to attach them to dummies but in the end put them on swivel clips so the can be attached and detached. In hindsight this seems like a better idea but it was actually because I failed at buying dummies.
I don't have any kiddies and I'm not a fan of shopping so I bought what I thought was a pack of four dummies of amazon. When the arrived there was only two.
Next I tried nipping to the pound shop but they only had pink and I didn't want them all to be on pink dummies.
Finally with only a day left before these guys had to be in the post. I got some from the supermarket while shopping with my mum. They were a perfect set of 4 bright colours to match the toys. I only went and left them in my mums car, didn't I. Fool that I am.

So with no time left I bought swivel clips from the haberdashery I work at and sent them off like that.

Alls well that ends well though :)


Thats all for today.
Don't forget to vote on this months free pattern by checking out this blog post here