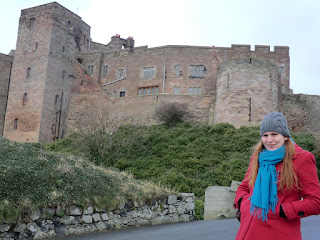 Hello this is me looking very cold at Bambrough castle.

3 years ago I couldn’t crochet to save my life. I was a knitter, I’d tried to teach myself crochet a few times but I was worse than useless. I did loads of other crafts as well, I made jewellery, cards, did a bit of cross stitch and sewing. I work managing a Haberdashery that specializes in buttons (hence most of my gurumis have buttons on them) and one of the girls I work with was really into crochet, she’d taught a few of the other girls and whenever there were quiet times they all had their hooks out going through the stitches. She wanted to teach me too but I told her there was no point I’d tried it I’m useless, I’m a knitter and a knitter I will stay.

Anyway one quiet afternoon I gave in, thinking if she wants to waste her time trying to teach me, and it’s a choice between doing that and cleaning then I’ll give it a go. It would be a very big lie to say I was a natural crocheter, I found doing the chain so mind blowingly complex I didn’t even want to attempt a single crochet stitch but I tried my hardest. I would chant what I was doing, through, round, back, round, both off and such, so I’m sure most people thought I was mad; apparently the look of concentration on my face was hilarious. I got there though and when I could do chain, single, double and treble stitches I felt like a crocheting god.

So now I could do the basics badly I started looking crochet magazines. I might get slated here but I found a lot of crochet items in them old fashioned, crochet just didn’t look as cool as the stuff I was knitting and very few thing in the magazines made me passionate about picking up a hook and making that right now.

I started making flower motifs these are great because you learn a lot of different stitches and techniques and they led me to the first time I noticed I could get hooked on this. I was looking at a pattern and thought, so you’ve got a chain space, into that you do SC, 2DC, TC, 2DC, SC and it makes a petal. Of course it does, it goes up then down that’s simple maths I can understand this, I’m a geek. Suddenly patterns that looked like they were written by aliens, just made sense, not only could I read it but I could write this new language too.