Well my copy of Love crochet magazine hasn't turned up yet so I can't do that review yet. I'm also having one of those strange weekends where I don't have any pressing work on so I've been able to play.

Lucy over at Attic 24 has been asking for mandalas for Yarndale. Yarndale is a festival of all things yarn, I heaven for knitters and crocheters held in Skipton north Yorkshire. I found out about it last year but couldn't go because I was working at Duttons. I was tormented by people who had been to yarndale coming in the shop to buy buttons to go with yarn they had bought, pulling out hanks and balls of  the most beautiful yarn out and making me drool. So as you can imagine I can't wait to attend this year.

So back to mandala. Lucy has asked for us crocheters to make a mandala and send it in to be displayed at yarndale. You can read more about it on her blog here

I have never made a mandala. There are a lot of patterns out there.

I started off trying the little spring mandala by Barbara smith

This is my result 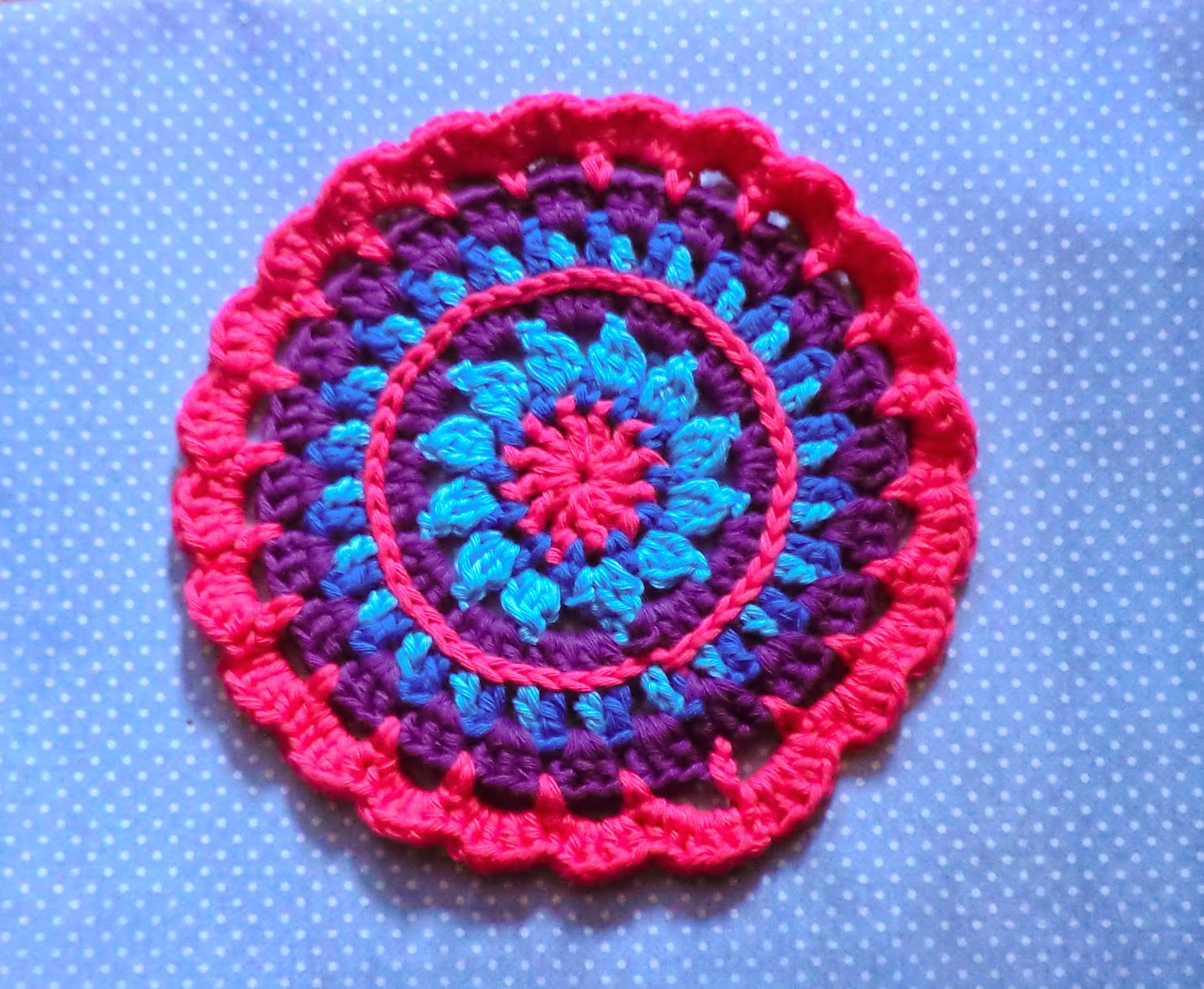 I went slightly wrong on the third round and one of my bobbles has an extra stitch in it but other than that I really enjoyed making it. The pattern is really easy to understand and has some techniques I haven't tried before but were fun and gave a great result. If anything I think mine ended up being a bit small. Lucy wants mandalas that are about 8 inches across and this is only 6.

Next I attempted the spokes mandala 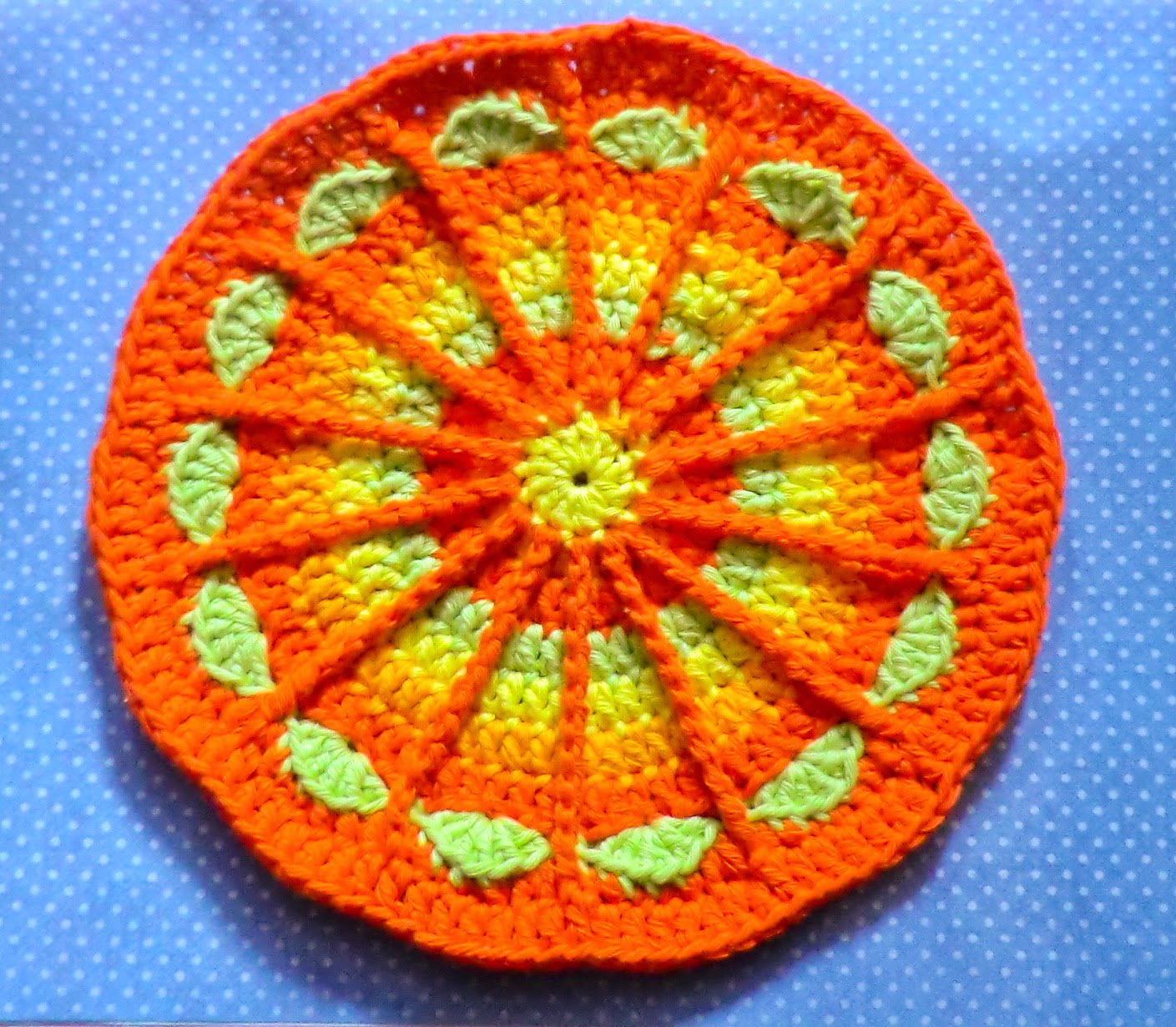 I went for really bright colours on this. I used the rico cotton aran and a 3.5mm hook so it was nice and tight and would hold its shape. The yarn worked well but it does split so doing the long spokes was pretty tricky. While the finished product looks great there really are only two rows in this that are not just basic treble crochet in the round so it wasn't as much fun to make as my first one.

Lucy wasn't wrong these really are addictive to make. Next up I had a go at Lucy's pattern that shes written exclusively for yarndale. This one was really fun. Every row is different so its really entertaining to crochet. I made a slight change to the pattern after the slip stitch round I worked the next round in back loop only. I like the edge this gives as it defines the slip stitch round.. I'm going to make a few more of these in different colours.

Next up was a bit of a departure but I saw this on pinterest and couldn't resist. This pattern for a heart pop holder can be found here on Sandras blog cherry heart 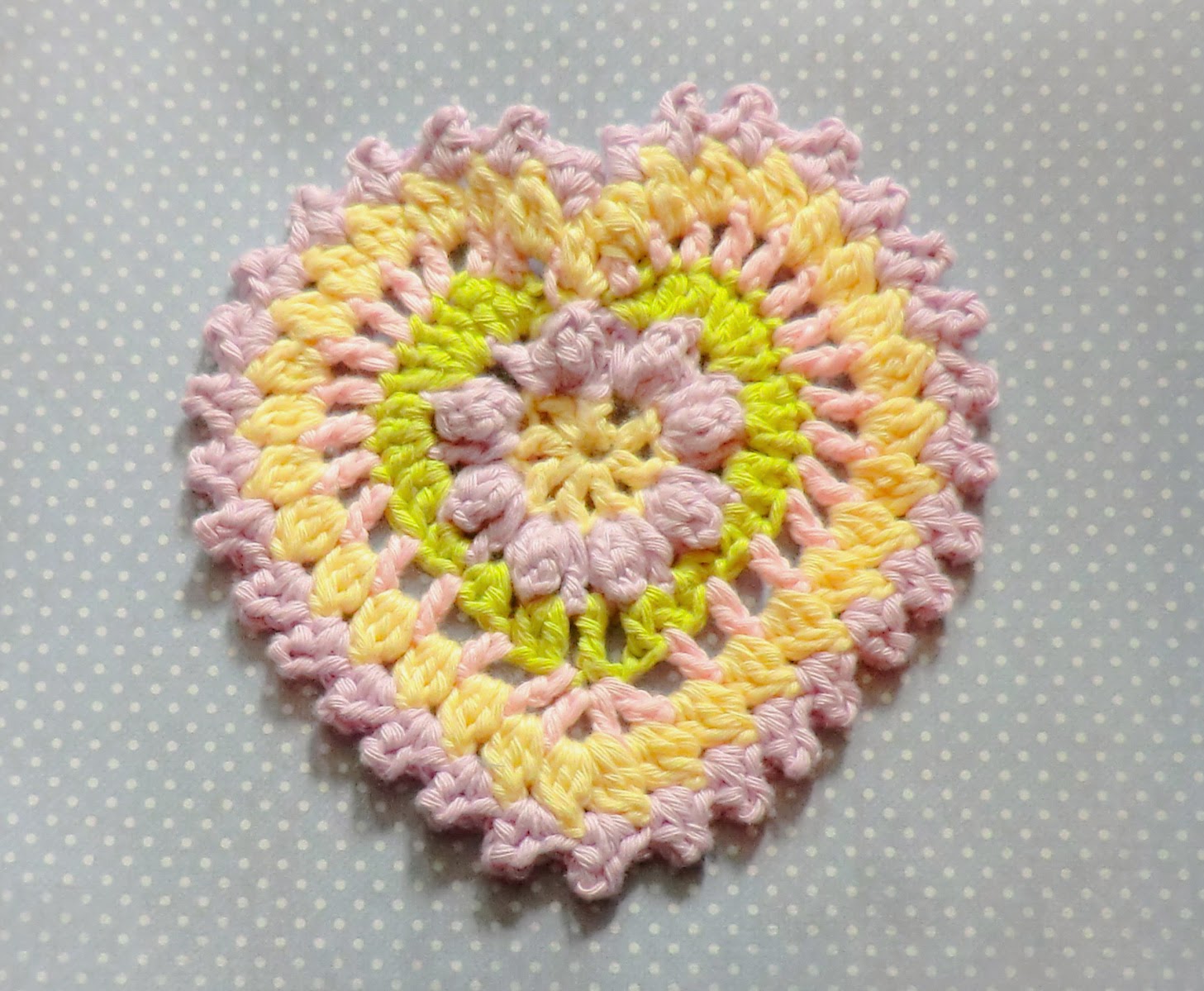 I love this its so pretty. I did struggle a bit with the pattern but there is a chart which really helps. I had to fudge it in areas but I think it worked out ok.

With so many wonderful patterns out there I didn't know what to make next but I was already starting to think of my own ideas and ways I would make one of my own design. I had a play and came up with this. 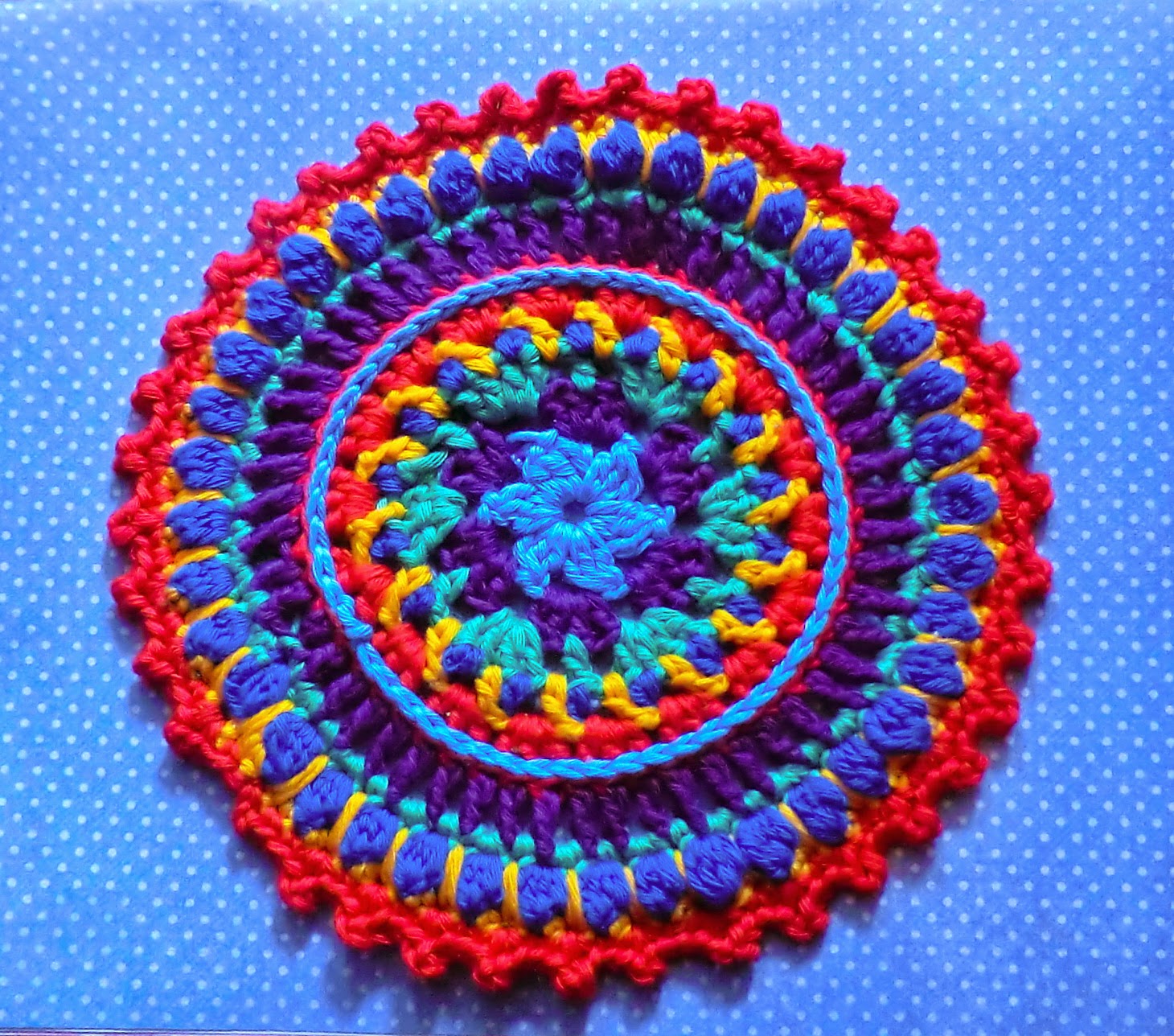 Its a bit of a work in progress. I used some of the stitches I liked in the first mandala I made and added a drop stitch to create the colour work between the bobbles Its finished with a picot edge cause I really enjoyed doing the picot edge on the heart.

I haven't written this pattern down yet but I will and it'll be available here free for Yarndale.

So here they are all together and now I just have to decide which one to send to Lucy. 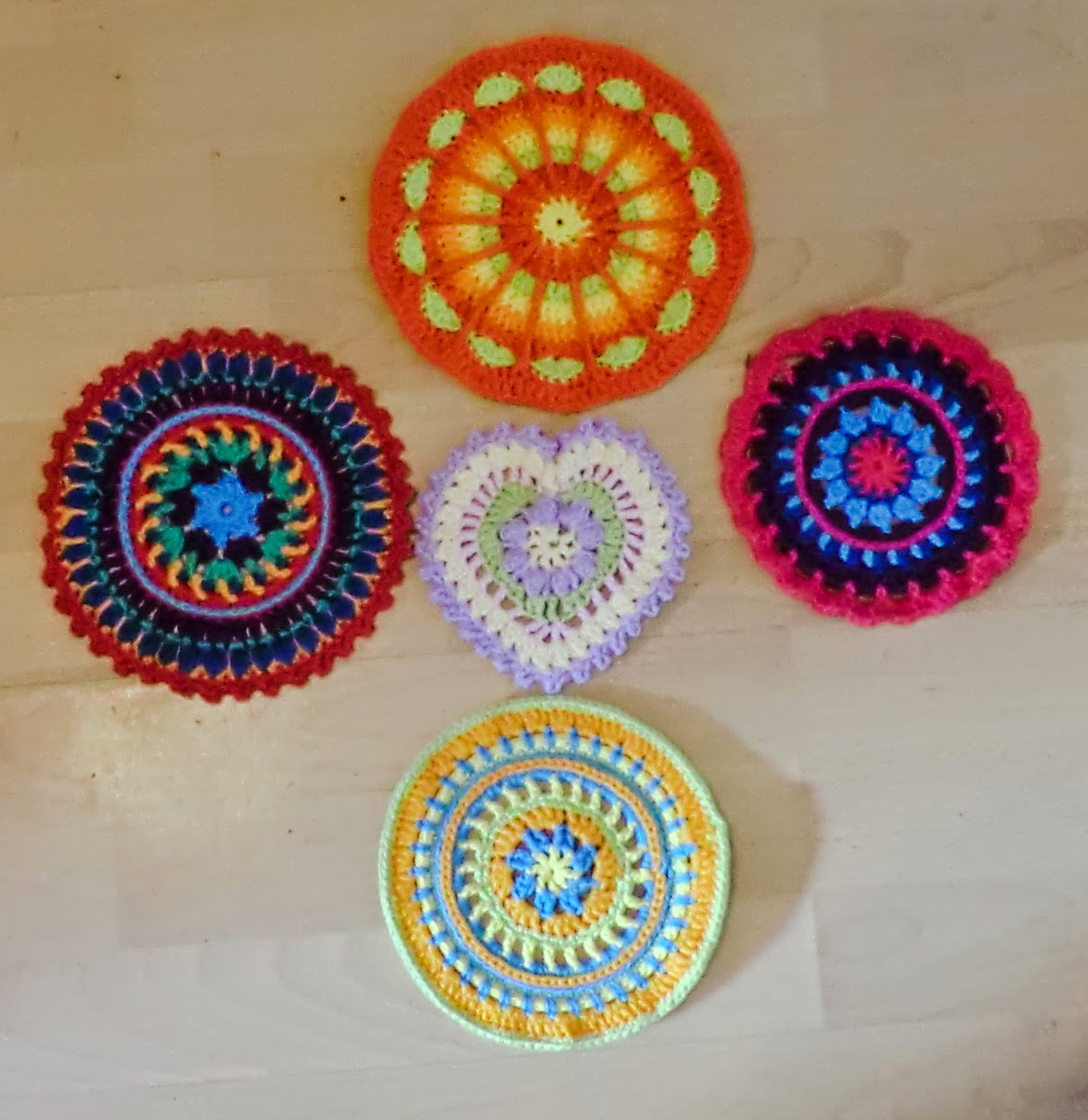